Frank Sinatra goes down in history as one of the greatest vocalists of all time.  He preceded The Beatles and Elvis, as the first singer to draw-in droves of swooning girls to his concerts.  Scientists recorded his voice using sensitive instruments to discover the unique elements making-up the rare quality of his voice.  They couldn’t find it.

Now, we can buy a box of sugary cereal like Cocoa Crispies, with a complete list of vitamins and minerals one can expect per serving.  Which misses the point.  Scientists in lab coats don’t really know how to measure what’s healthy for the human body any more than they can identify what’s special about Frank Sinatra.

People tell me that they can’t afford organic groceries, but that can’t be serious.  My breakfast this morning cost about one dollar and ten cents.  This included one organic potato and two eggs, more than I could even finish.  If one goes out for breakfast at a Waffle House, eggs and potatoes would run about $4, plus tax, plus tip.  The real issue is that people hate cooking, me thinks.

The thing about “organic” is that other factors play-in.  For example, I fried my potatoes in organic sunflower oil, which retains some healthy benefits even in high heat.  Waffle House would have used some kind of super-cheap chemically-extracted oil which triggers cholesterol production in the liver when consumed.  Plus, the salt at W.H. would be bleached sodium chloride, technically a poison.  Raw Himalayan or Celtic sea salt is bioavailable to the cells.  Sodium chloride, as a poison, is not absorbed into the cell, but salts the fluids around the cell, leaching fluid from inside the cell, deflating it of water, making it more difficult for the heart to pump blood into it, contributing to high blood pressure.

Plus, I added cayenne and raw garlic to my potatoes, which they don’t offer at Waffle House. 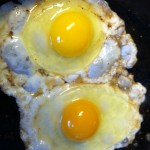 The eggs here were two different varieties.  One was organic (top egg), which means that it was fed organic grains, but likely kept in a warehouse, even though it says “cage-free” on the container.  The other egg was taken from chickens living on the farm where I live, and it is much more orange in color (bottom egg).  The reason is that these chickens roam the pasture eating bugs, grass, and live plants.  The orange color is the same “orange color” found in wild salmon flesh.  The Omega 3 fatty acids are rich in animals feeding on bugs and plants.  But a diet of grain produces less-quality fats in the egg or fish.  We’ve been told that eggs are bad for us, but that depends on the diet of the animal.  Eggs draw fats from the chicken’s body, and their dietary intake, in order to perpetuate their species (as the egg), and we want to consume that, not the chemical byproducts of factory-farm feed passing into the chicken’s egg. 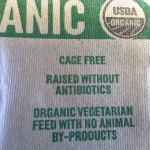 The other problem with factory farms is their use of antibiotics in the feed.  Crowded conditions and poor feed quality cause chickens to have weak immune systems.  When one consumes factory-farmed eggs, then it likewise weakens the immune system of whomever eats those eggs.  We think of eggs as being created equal.  But this is not correct.  We can visually see the difference between an “organic” egg and a free-roaming pasture egg.  Even more, there is a vast difference between these two eggs — and a factory-farmed egg.  You body appreciates the difference.  Omega 3 oils help the human systems to repair tissues and assist other critical internal functions.

Scientists have not identified many elements in our food that support health.  Vitamins and minerals are the smallest and quite insignificant variables.  It’s like scientists are at a Frank Sinatra concert and all the screaming girls are pushing forward, while they stand at the back, scratching their heads. 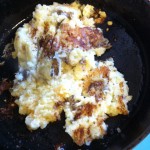